The emerging field of tissue engineering and regenerative medicine have the noble goal to develop lab-grown human tissues or alternative biomaterials to assist in their self-healing. In order to be functional in the human body, these biomaterials need to meet specific requirements of the intended site of implantation both in terms of biological, biochemical, and physical properties. During the research and development of the bioengineered system, a number of characterization assays need to be performed to extract qualitative and quantitative information on its performance and to compare with reference values from native tissues. These products are complex and delicate since they are composed of soft natural and/or synthetic biomaterials, biological molecules, and can even contain cells. Therefore, characterizing both these novel biomaterials and native tissues using standard techniques requires, when possible, a high level of customization which can be a challenge and a major source of variation in the information obtained (see our previous article on this subject).

With this in mind, herein, the feasibility of using the ElastoSens™ Bio to evaluate the viscoelastic properties of soft tissues was investigated. Sheep and pig are widely used in research. For this reason, samples from fresh organs (heart, kidney, liver, lungs, and brain) from sheep and pork (5 individuals each) were tested using ElastoSens™ Bio and the results analyzed to evaluate the consistency and robustness of the method.

Fresh heart, kidney, liver, lungs, and brain from 5 individuals of sheep and pork were obtained from a slaughterhouse located in the suburb of Montreal (QC, Canada) and kept in the fridge for a maximum of 72 hours until testing. The organs were cut into two similar pieces and cylindrical samples (diameter = 22 mm, height = 8-12 mm) were punched and inserted into the sample holder of the ElastoSens™ Bio. Both the arch punch and  ElastoSens™ Bio’s sample holder have the same diameter (22 mm). A spatula was used to accommodate the sample ensuring its contact with the bottom and the walls of the sample holder. A cylindrical weight (150 g, diameter 22 mm) was left over the sample for 10 s to provide a consistent loading history to the specimen ensuring that they are at a similar reference state. The steps below were followed for the testing in the instrument: 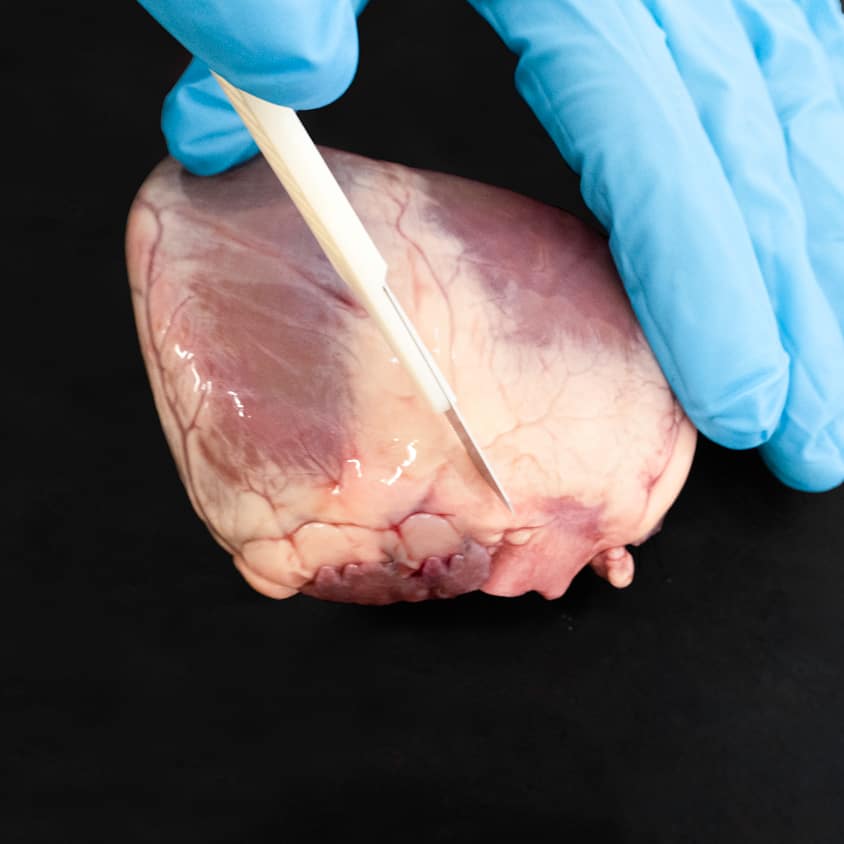 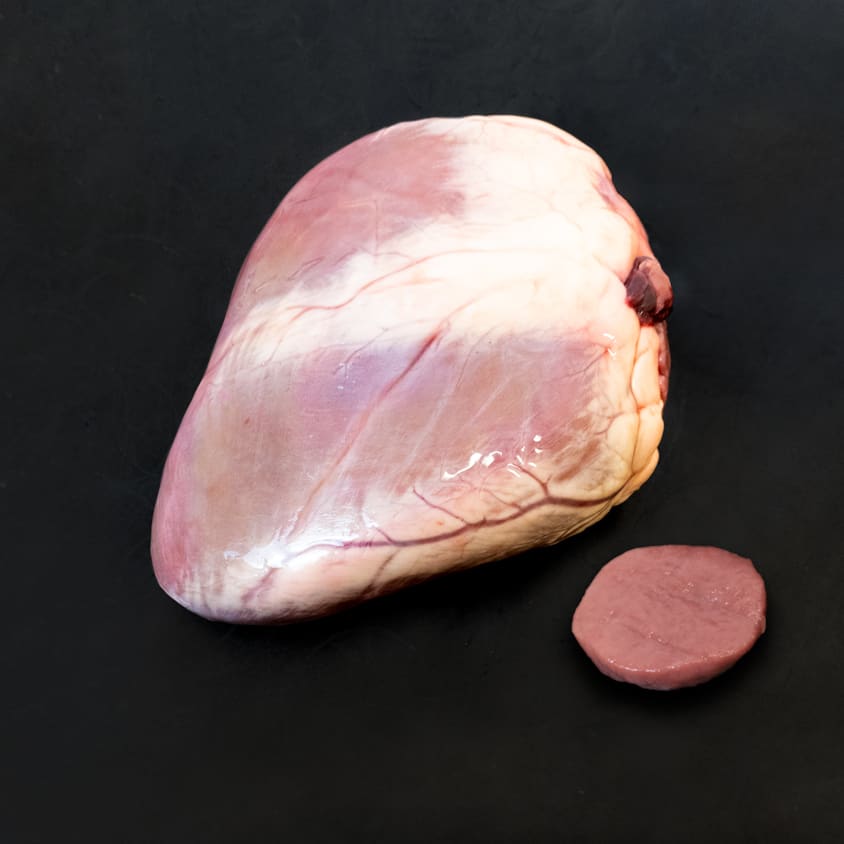 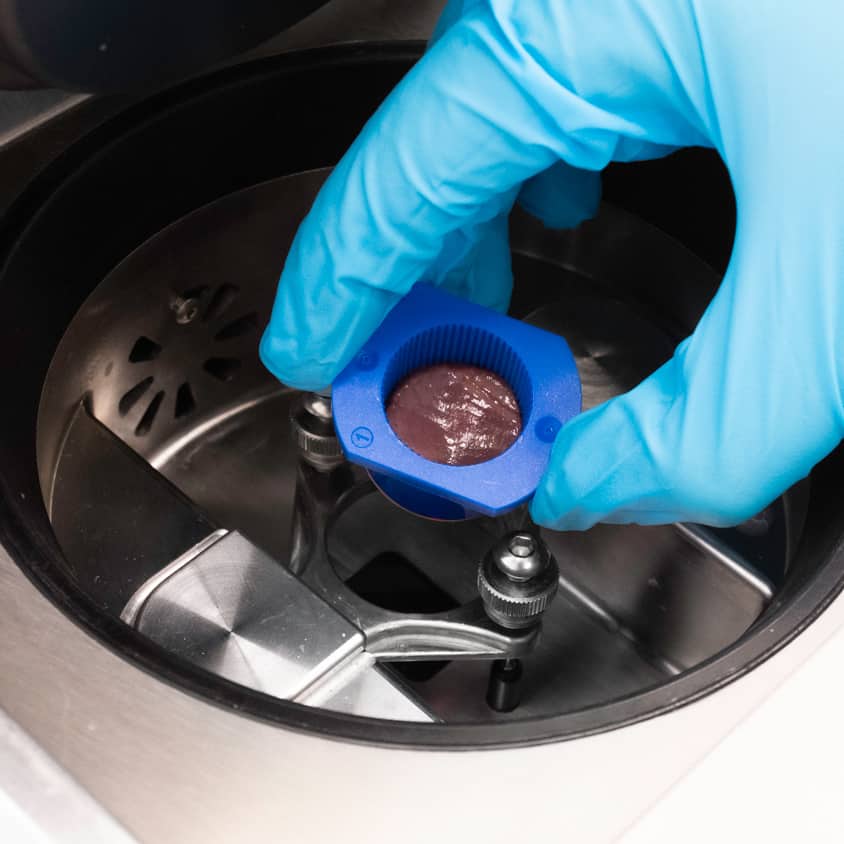 Five specimens for each lung, heart, brain and liver were tested while for the kidney only 3 specimens were possible to be well excised (and tested). Average results are expressed as mean ± standard deviation. Statistical analysis was performed using GraphPad Prism version 9 (GraphPad Prism Software, La Jolla, CA, USA). Ordinary one-way ANOVA was applied. Significance was retained when p < 0.05.

The viscoelastic properties of fresh organs obtained from pork and sheep were successfully measured using the ElastoSens™ Bio. Mastering the sample cutting into cylindrical shape and sample introduction into the sample holder was shown to be essential for ensuring the quality of measurements. In addition, as much as possible, samples were taken from similar regions within the organ and loaded in the same direction into the sample holder. Tests were conducted quickly after this preparation to avoid any drying of the sample’s surfaces. Average shear storage modulus of each organ is represented in Fig.1. 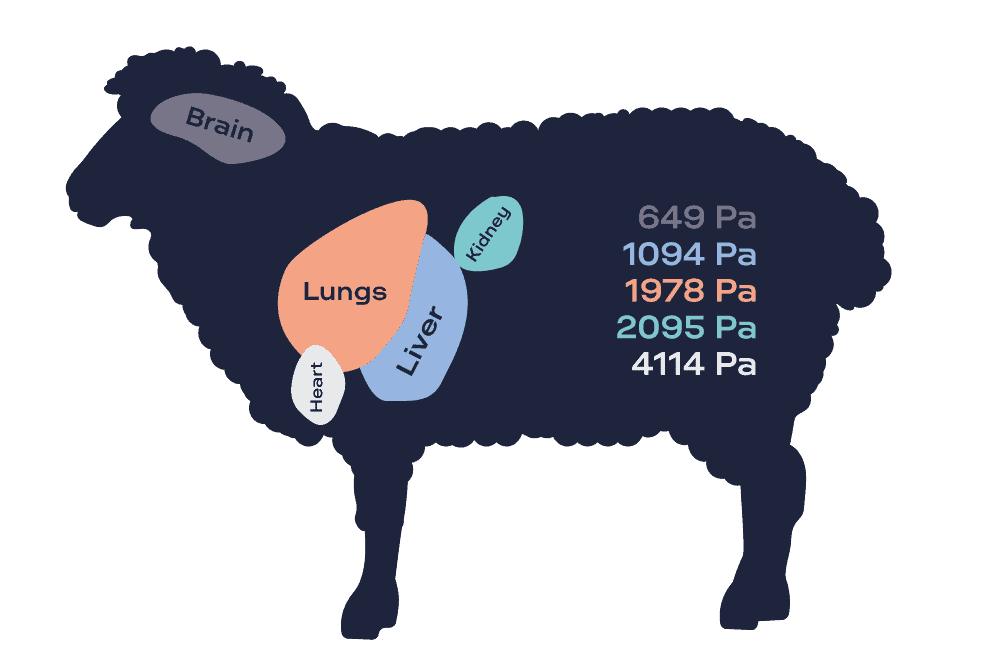 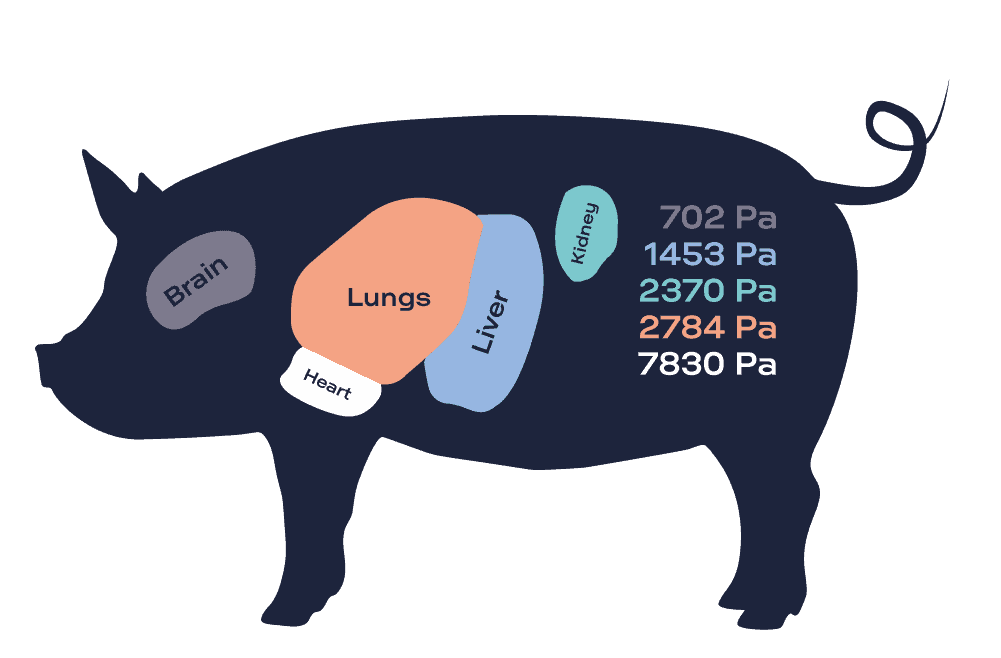 Human tissues and organs are composed of cells and a matrix of proteins, polysaccharides and water known as extracellular matrix. At least for mammals, these components are similar among the members of a single or different species but the proportion among them can have significant differences as a result of genetic, diet, environment and health conditions of the individuals. Because of that, the viscoelastic properties of mammal tissues can vary even among the individuals of the same species. In the appendix (Table A1 and Fig. A1, available in the PDF below), it is possible to observe that the shear storage modulus and tan δ among the individuals of the same species are in the same order of magnitude but they do present slight variations (with a few significant differences among them).

Fig. 2 shows the average shear storage modulus (G’) and tan δ of each organ per animal. Within the same species, all the different organs had statistical differences among themselves. Brain is the least stiff organ which can be related to their low collagen content [1]. On the other hand, the heart is the stiffest due to their high ECM protein content (90% is composed of 10 different proteins including collagen and elastin) [2,3]. This high protein content and fibrous structure as well as the presence of 4 chambers with different functions (upper chambers receive the blood and the more muscular lower chambers pump the blood) can also explain the higher variation in the viscoelastic properties. Apart from the brain and kidney in which no statistical differences were found, the other organs showed to be stiffer for pork compared to sheep.

Overall, the simple and consistent method of measuring the viscoelastic properties of soft organs reported in this study can greatly facilitate the research and development of bioengineered tissues. 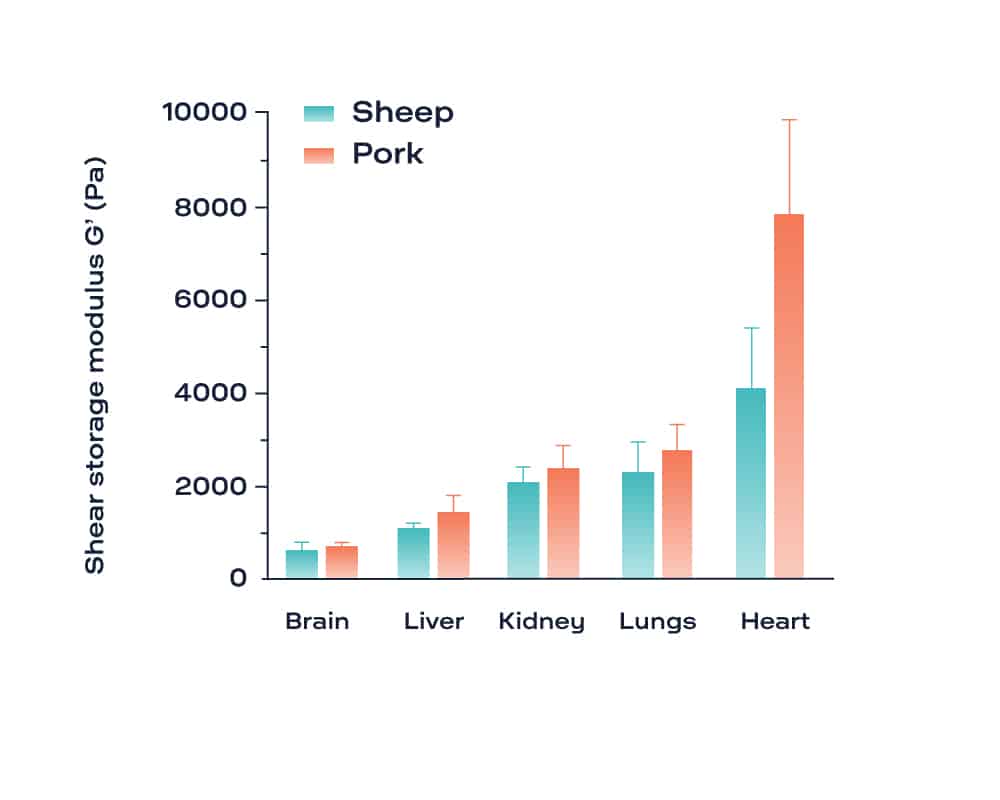 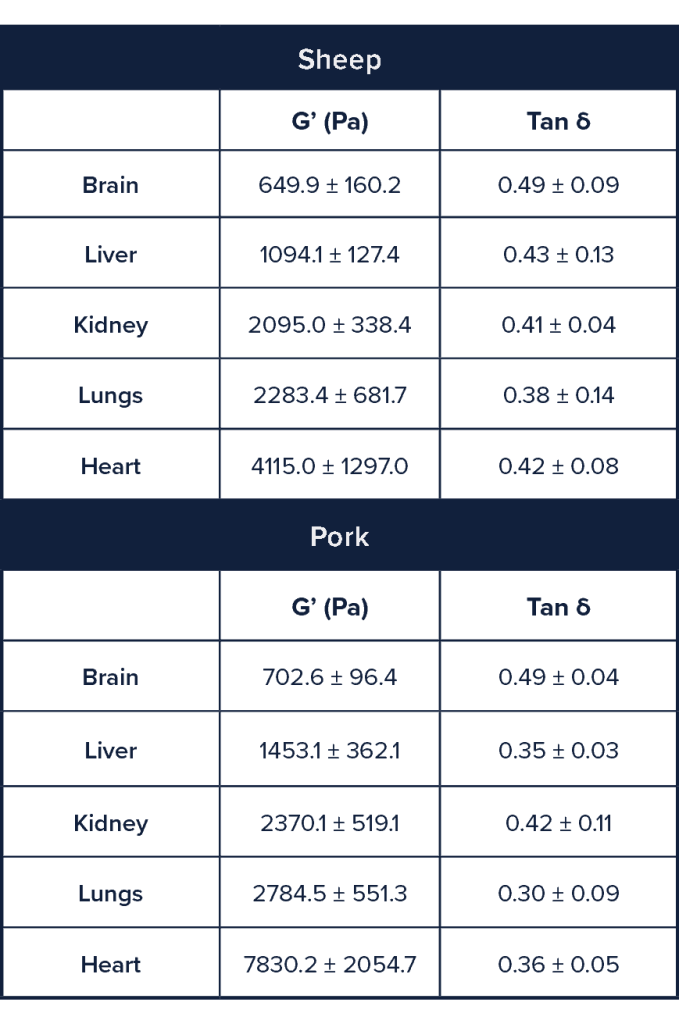 The viscoelastic properties of fresh organs obtained from pork and sheep were successfully measured using the ElastoSens™ Bio. The protocol optimization for cutting a cylindrical sample from the fresh organ and its introduction into the sample holder was essential for the quality of the measurements. Overall, porcine liver, lungs and heart were significantly stiffer than sheep organs.

[1] Siddiqi, N. J., Al‐jafari, A. A., & Alhomida, A. S. (2000). Investigation of total, free, peptide‐bound, protein‐bound, soluble and insoluble collagen hydroxyproline content in tissues from the arabian camel (Camelus dromedarius). Cell Biochemistry and Function: Cellular biochemistry and its modulation by active agents or disease, 18(4), 243-248.