Imagine for a moment you are trying to reach the summit of a mountain. If you’re not given any map or indications, it will most likely take you a really long time to reach the summit if you’re lucky. But you may not even reach it, meeting insurmountable obstacles such as cliffs or ice crevasses. You may have thought to bring adapted equipment, food and water with you, but if you get lost, you will eventually not last long in the wilderness. Doing an analogy with the tissue engineering research, if a cell is transplanted in a hostile environment (the mountain slope), even if it is initially healthy, its survival rate will rapidly drop if it is not able to access resources. The cell won’t be able to fulfill its goal without a guiding system. Hydrogels are promising tools to help regenerate injured tissues, and to help transplanted cells to reach their full potential. Although matrices composed of hydrogels can contain what cells need (resources and maps), they are not normally organized in a functional way for the cells. Recently, to adapt to the scale of the cell itself, as well as to facilitate its survival and function, scientists are exploring hydrogel microparticles, or so called microgels.

The Team of Prof. Dr.-Ing. Laura De Laporte at the DWI – Leibniz-Institute for Interactive Materials, Aachen, Germany developed injectable microgels, dispersed and able to be magnetically aligned inside a bigger bulk hydrogel to regenerate different types of tissue. First, to produce the microgels, the authors started to functionalize six-arm poly(ethylene oxide-stat-propylene oxide) (sPEG) with acrylate groups through an esterification reaction (combination of an alcohol with an organic acid to form an ester and water). This acrylate group insert is indeed useful as it allows, once implemented, to expose the microgel to progressive hydrolysis of the ester bond, giving the degradation products a small enough hydrodynamic radius to allow elimination through the kidney.

In order to make it sensitive to an external magnetic field, the obtained functionalized “sPEG-A” was then mixed with superparamagnetic iron oxide nanoparticles (SPIONs, nanoparticles that possess the ability to align in the direction of an applied magnetic field). Both “sPEG-A” precursor and SPIONs were poured into rectangular polydimethylsiloxane (PDMS) molds of 5 x 5 x 50 µm3. Then the system was crosslinked with UV-light irradiation for 60 min. To make these rod-shaped sPEG-A microgels bioactive and increase their contact surface with cells, a classic cell-adhesive peptide containing the RGD sequence (three linked amino acids known to be identified as focal adhesion point by cells) was homogeneously grafted via a Michael-type addition. The effective grafting and the homogeneous presence of the peptide on the microgel surface was confirmed with chemoselective fluorescence, with a thiol-selective fluorescein and an antibody-based staining, respectively. 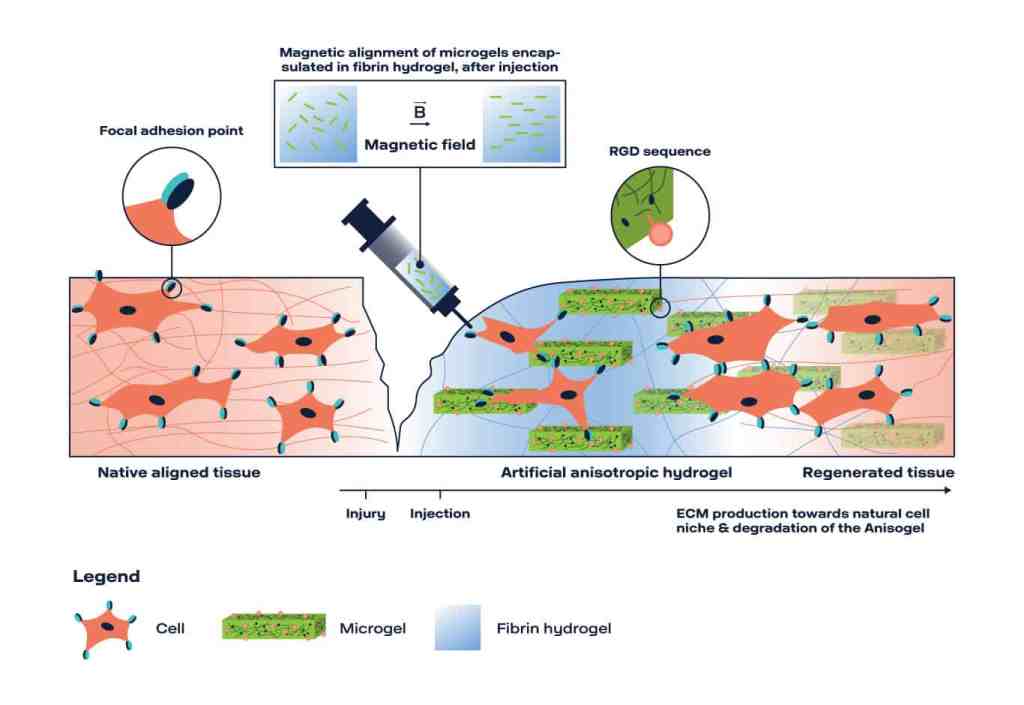 The authors were able to demonstrate the cytocompatibility and the stability of the right-square-prism shaped sPEG-A-RGD microgels, both under UV-light irradiation and over time with different solvents washing trials. Submitted to a magnetic field B = 150 mT (about 30 times the strength of a typical refrigerator magnet, but 10 times less than a neodymium magnet), the sPEG-A-RGD microgels are able to 90° shift alignment within 40 seconds. Simultaneously, the bulk fibrin hydrogel containing the microgels was crosslinked with an enzymatic solution. The orientation of microgels could then be tuned in the desired direction and fixed, both with the removal of the magnetic field and because of the fibrin crosslinking around the microgels.

The impact of this anisotropic multi-scale system was studied on two different cell types. Fibroblasts were mixed directly with microgels and fibrinogen, or neurons were set on a cover glass and covered with a microgel/fibrinogen mixture. Interestingly, even if the fibrin has many more cell binding sites than the microgels, fibroblasts displayed a much stronger interaction with the microgels, certainly due to an elasticity difference. Measured with an atomic force microscopy nano-indentation system, the Young’s moduli of microgels and surrounding bulk fibrin hydrogel were 7.3 ± 1.6 kPa and 1.6 ± 0.4 kPa, respectively. This result was confirmed with a mechanotransduction intracellular-pathway analysis of implemented cells. Fibroblasts indeed display a more spread morphology on stiffer surfaces. To conclude the study, De Laporte et al. implemented neuronal cells into their multi-scaled system. This time, the biochemical cues provided by the RGD sequence did not significantly affect the length and alignment of nerves, but the anisotropy of the microgels themselves did. The so-called “Anisogel” successfully oriented the growth of both fibroblasts and neurons.

In their publication entitled Biofunctionalized aligned microgels provide 3D cell guidance to mimic complex tissue matrices published in may 2018 in the journal Biomaterials, De Laporte’s team successfully reported a method to biofunctionalize rod-shaped, magneto-responsive, microgels modified with bioactive peptides. Enclosed in a fibrin bulk hydrogel, those microgels were able to guide the growth and function of fibroblasts and neurons, establishing a new mechanical communication system that could be applied to all sorts of native tissue regeneration.