An inorganic biomaterial with great

When you have a cut or scrapes in your skin, you will normally start to bleed. Cells present in your blood will then start to stick together at the wound site and clot, forming a physical barrier to avoid further blood loss. This clot is mainly composed of a cell type known as platelets and a protein known as fibrin. This clot turns into scabs as they dry with time. This natural mechanism of preventing excessive blood loss may not be sufficient in extensive wounds or surgical cuts or incisions and the body may need extra help. Hemostatic agents (HA) in the form of sponges, gauzes, powder, and paste have been developed to aid in this process. The immediate aim of these agents is to create a physical barrier helping the formation of a clot and accelerating the wound healing. Some of these products are also designed to be biologically active in the sense that it will stimulate the coagulation at the wound site. Despite the availability of commercial HA’s, research is still conducted to develop more effective technologies.

A group of researchers from Dalhousie university led by Dr. Mark Joseph Filiaggi investigated the potential of a specific polymer named sodium polyphosphate (NaPP) to serve as an effective resorbable hemostatic agent. The group had previously developed an in situ-forming embolic agent (composed of the NaPP polymers) used to block blood flow in target blood vessels in the context of a minimally invasive procedure known as embolization. This agent is formed at the wound site as a dense coacervate layer after the addition of two solutions (one containing NaPP and the other containing divalent cations). In their study entitled “Degradation and hemostatic properties of polyphosphate coacervates” published in the journal Acta Biomaterialia, the group evaluated the hemostatic properties of different formulations of this biomaterial by assessing blood or plasma coagulation induced by NaPP.

The authors prepared six formulations of this biomaterial by varying the degree of polymerization (number of the repeating units present in the polymer) and the divalent cations type (calcium, strontium or barium). The hemostatic potential of these formulations was then evaluated using  conventional blood clotting assays including whole blood clotting time, prothrombin time (PT), activated partial thromboplastin time (aPTT) and platelet adhesion. Overall, the procedure consisted in adding the biomaterials in a polypropylene tube with the coagulation reagents (depending on the assay) followed by the addition of recalcified blood or plasma. Each tube was gently shaken to visually check for blood or plasma flow. Clotting time was reported as the time required to achieve no flow when the tube was shaken (procedure illustrated in the image below). As controls, the authors also evaluated the clotting time of Surgifoam® (a commercial HA) and of blood or plasma without any biomaterial. 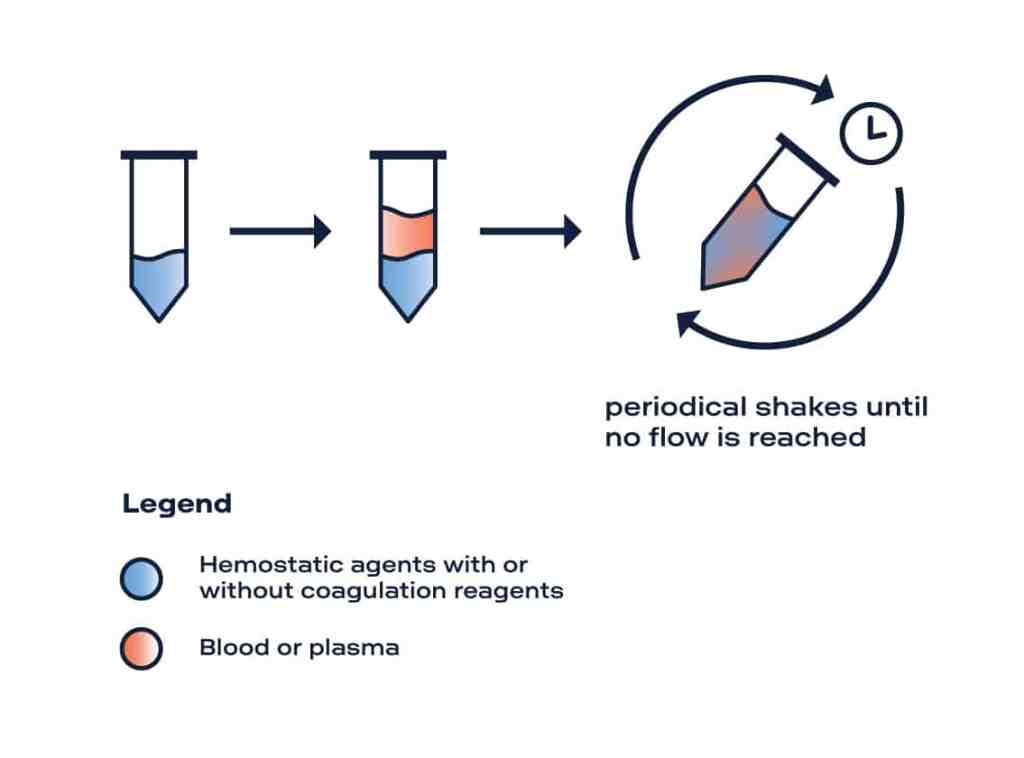 Results from the whole blood clotting time showed that blood without any biomaterial clotted in 7 min and the presence of Surgifoam® did not decrease this time significantly. This was expected since this HA is suggested to serve more as a physical barrier against bleeding rather than altering the blood clotting mechanism. An enthusiastic observation was that 5 (out of 6) formulations of their PP polymer significantly decreased the clotting time by 25 to 60% (depending on the formulation). Similarly, 5 formulations significantly decreased PT compared to the tube with Surgifoam® or empty by roughly 50%. This pronounced decrease is related to the  influence of NaPP on thrombin generation reported in literature and consequently on the fibrin clot formation. These results are strong evidence of the great potential of NaPP as a hemostatic agent. Surprisingly, aPTT was significantly increased compared to the control. The authors believe that this result might be an artifact caused by interactions between the polyphosphate chains and phospholipids in the aPTT reagent, reducing the phospholipids available for triggering the coagulation.

Finally, platelet adhesion was evaluated by adding platelets over the surface of the different NaPP formulations and Surgifoam® in a multiwell plate. Platelets adhered in large numbers on the polyphosphate coacervates when compared to Surgifoam® however microscope images showed that their morphological form was related to a more activated state in the commercial HA.

The promising hemostatic potential of polyphosphate coacervates was demonstrated in this study. The fact that this biomaterial can be easily applied or injected at the wound site forming a dense coacervate layer in situ that serve both as a physical and as a biologically active barrier (accelerating the coagulation cascade), and that this biomaterial is afterwards easily resorbed by the body make NaPP a great candidate as a hemostatic agent for clinical use.