Imagine yourself in the middle of an unknown large city late at night. No people in the streets and neither public transport or taxis anymore. There are two things that can guarantee your arrival at your destination: a city map and a personal transport (e.g. bike, walk or car). If you have just the city map, you will know how to get to your destination but it can take you a really long time depending on the distance. If you have just the personal transport, you can travel longer distances faster however you will not know how to reach your destination. Doing a parallel with research that involves the culture of cells, the environment (personal transport) and the tools (city map) that are provided to them do influence their function. You can survive in the large city without the map or a personal transport, however you will not arrive at your destination, at least not in a reasonable delay. Cells can survive and even multiply in different conditions (as soon as they have nutrients and oxygen), but to develop their specific functions (for example, cardiac cell contraction during cardiac cycles) they do need their specific environment and instructions to perform these processes.

It is now well known that hydrogels based on extracellular matrix (ECM) components extracted from native tissues are a good strategy for the in vitro culture of cells or for the development of bioengineered tissues. The ECM of a tissue consists of all non-cellular components including water, proteins, proteoglycans and glycoproteins (protein binded with carbohydrates) which were produced by the resident cells all along body development. Each cell type has specific instructions on how to produce their matrix to give the appropriate mechanical support to the tissue. In addition, all the components that cells produce and the way they are organized allow them to perform their own specific tasks in the body.

Purified ECM proteins have been largely used in cellular research and tissue engineering but a single type of protein or a mix of few types does not necessarily represent the molecular complexity and heterogeneity of the ECM. To address this point, a research group from the Lawrence Livermore National Laboratory led by Dr. Fischer and Dr. Wheeler published a great article [1] showing how neural cells act differently depending on the substrate they are seeded on. Different coatings were applied to a multi-electrode arrays (MEA) device: a brain ECM hydrogel, the commercially available MaxGel (non-specific ECM), and poly-D-lysine, a non-ECM polymeric substrate (control group).

Firstly, the group applied a detergent-enzymatic method to decellularize brain tissues of sprague-Dawley rat pups. This method was previously reported [2] and it consists of the use of detergent and enzymatic solutions to degrade – to a certain extent – tissues and remove the resident cells in order to obtain their ECM. Brain ECM (bECM) had a nearly complete removal of the DNA content (~99.2%) which was comparable to the original work of the decellularization method. The resulting matrix had a gel-like texture which they used to cover the MEA devices. Neural cells were then seeded on devices coated with bECM, MaxGel and poly-D-lysine (control group) and their activity was monitored and compared over 30 days in vitro. 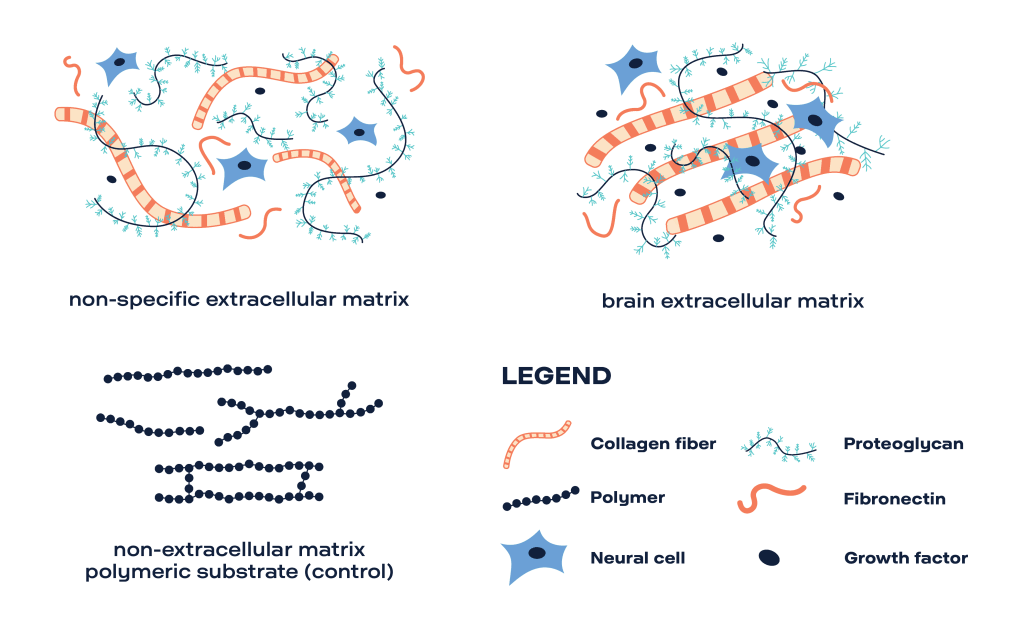 The authors observed that the ECM coating had no significant effect on cellular composition and proliferation. However, 100 % of the devices covered with bECM and MaxGel showed neural electrophysiological activity after 13 days of culture against 40 % of the control devices (without any coating). By day 23, at least 50% of the devices covered with bECM showed activity being significantly higher than both MaxGel and control group. In addition to this early neural activity, the development of functional distinct clusters (communities) was also enhanced with bECM suggesting faster network maturation which trended towards statistical significance for the bECM compared to MaxGel devices.

Overall, this study confirmed in a systematic way the beneficial effect of using specific ECM components on the cell culture. This is one example that has been motivating research groups and companies to develop and improve decellularization processes to obtain affordable and superior specific ECM-based hydrogels. The use of these hydrogels can give the exact mechanical properties and biological clues to the seeded cells to perform their physiological functions in vitro. With this, cellular processes under the presence of therapeutic compounds or pathological conditions can be better studied and the development of functional bioengineered tissues can be brought closer to reality.

Teens’ Tendency To Take Risks Exposed By Their Brain’s Viscoelasticity

When mechanical testing slows down the development of bioengineered vascular grafts