3D printing has enabled scientists to precisely place biomaterials and cells in a 3D space with the goal of recreating the structure and function of complex biological systems, from tissues to organs. However, gravity imposes a major challenge to successfully bioprint in air since soft and liquid-like inks can’t often maintain their print fidelity without additional external factors, such as temperature, light or chemical compounds. Although these external inputs are useful to decrease the curing time and achieve the convenient mechanical properties for printability, they often compromise the biological compatibility of the printing process.

One interesting approach that has been developed during the last decade to overcome the effect of gravity without altering the bioink biological composition is the Freeform Reversible Embedding of Suspended Hydrogels (FRESH) printing. This embedded printing approach is based on a support bath composed of a material with the appropriate rheological properties to hold the printed ink in place until cured. Thus, the traditional layer-by-layer printing in which lower layers bear the structure of upper layers, changes, since the bath is already supporting the structure of the printing. And consequently, printing direction is only constrained by the capabilities of the printer and the digital slicing methods used to design the printing trajectory.

The group of Prof. Jonathan T. Butcher from the Meinig School of Biomedical Engineering of Cornell University (Ithaca, NY) has developed a novel computational method for slicing 3D bioprints for non-planar and flexible printing movement to create complex curved structures with FRESH printing. The main difference between planar and non-planar sliced printing is that the first one builds up the geometry of each X-Y layer (i.e., layer by layer printing), requiring extra movements of the extruder between different parts of the X-Y layer at the same Z axis, while non-planar slicing allows for a continuous printing following the curvature in the Z axis. In their article entitled “Non-planar embedded 3D printing for complex hydrogel manufacturing”, published in the journal Bioprinting, they performed a comparative study between this novel form of digital slicing with conventional planar slicing methods, demonstrating its ability to increase printing accuracy and to enhance the tunability of the bioprint mechanical properties.

First, the authors developed the non-planar slicer model that works by dividing the digital image of the sample surface into connected lines forming a single continuous print path. Two sets of paths were generated, one for the X-Z plane and another for the Y-Z plane (Figure 1A). Then, the two sets of paths are integrated to create the first two layers of the print. These layers are further duplicated in an alternating fashion to create the desired thickness of the printed construct. Subsequently, they proceed to print the constructs in a support bath composed of 20% (v/v) gelatin, 2.5% (v/v) pluronic, 1% (w/v) arabic gum dissolved in 50% ethanol  (Figure 1B). After preparation, the bath was washed with 2% CaCl2 for alginate printing, and maintained at 40°C (since gelatin and pluronic are gelified at that temperature). Bioinks were composed of alginate (single material deposition) or alginate with a commercial India ink (multimaterial deposition). A comparative analysis between planar slicing and non-planar slicing methods was performed. Non-planar slicing showed a better print fidelity and cleaner prints with appreciably lower material accumulation in the support bath (as it can be seen in the video of the supplementary information available). 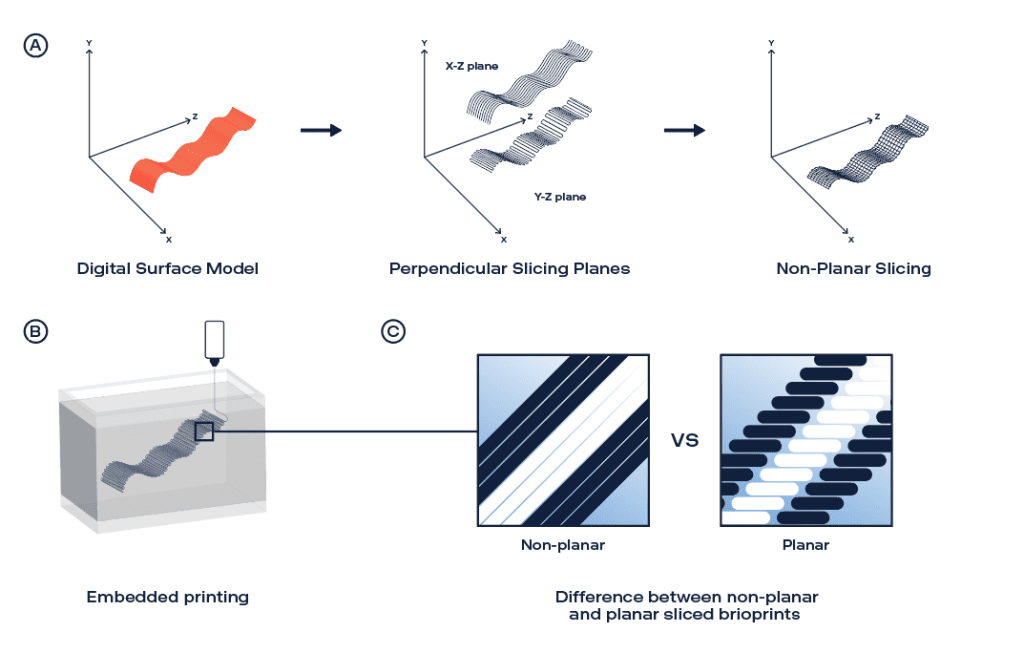 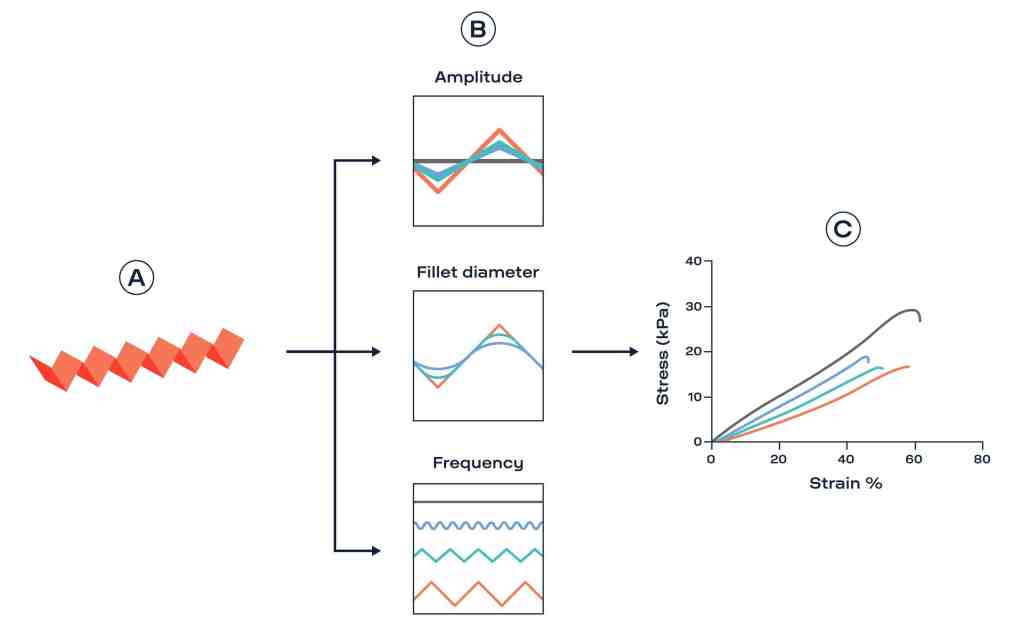 Figure 2. (A) Representative image of a digital bioprint with corrugations. (B) Three different printing parameters were modified (illustrated by the different colors of each parameter schema) to see the effect on the mechanical properties. (C) Representative stress-strain curve showing how the size and the frequency of a corrugation modifies the stretch response to strain.

The methods elaborated in this study can be applied to create mechanically tunable structures for a wide range of bioprinted constructs, including thin curved geometries such as tracheas, intervertebral discs, corneas or heart valve leaflets that were not possible to obtain with traditional slicing methods. They suggest that their future work will expand into creating heart valves with high fidelity structure and mechanical response to stress.