This application note is a summary of the article entitled “In Vitro Evaluation of Real-Time Viscoelastic and Coagulation Properties of Various Classes of Topical Hemostatic Agents Using a Novel Contactless Nondestructive Technology” published in the ACS Applied Materials & Interfaces journal [1].

— Hemorrhage is the main cause of death on the battlefield and in civilian trauma, and hemostatic agents (HAs) have been playing a vital role in bleeding management.

— The lack of technologies to characterize the performance of HAs in vitro hampers their development.

— ElastoSens™ Bio was used to measure the real-time changes in the viscoelastic properties of blood in contact with different hemostatic agents.

— HAs that can affect hemostasis independently of the natural blood coagulation were identified. These HAs have the potential of performing well even in the cases of coagulation disorders.

— The ElastoSens™ Bio can effectively help in the optimization and/or development of new HAs for various clinical scenarios.

Hemorrhage is the main cause of death on the battlefield and in civilian trauma. Topical hemostatic agents (HAs) are used in different situations from point-of-injury care to surgery to help control excessive bleeding in various parts of the body. The mechanisms of action related to the different forms (e.g. gauzes, sponges, powder, gel) and composition (e.g. kaolin, chitosan, gelatin, collagen, clay, cellulose) of the various types of HAs are not always fully understood mostly due to the lack of technologies to characterize them in vitro. This lack also hampers the optimization of their performance for particular scenarios and consequently the improvement of clinical outcomes.

In this published article, the authors used the ElastoSens™ Bio to follow the shear storage modulus (G′) over time of recalcified blood, citrated blood, and PBS in contact with eight HAs. Clotting initiation time, clotting rate, clotting time, and apparent clot stiffness were identified from the results and compared among the conditions. In addition, the long-term performance of the HAs was monitored over 5 days of incubation at 37 °C. The results were then discussed and correlated with the mechanisms of action of each HAs reported in the literature.

Table 1: Specification of each HA tested in this study. 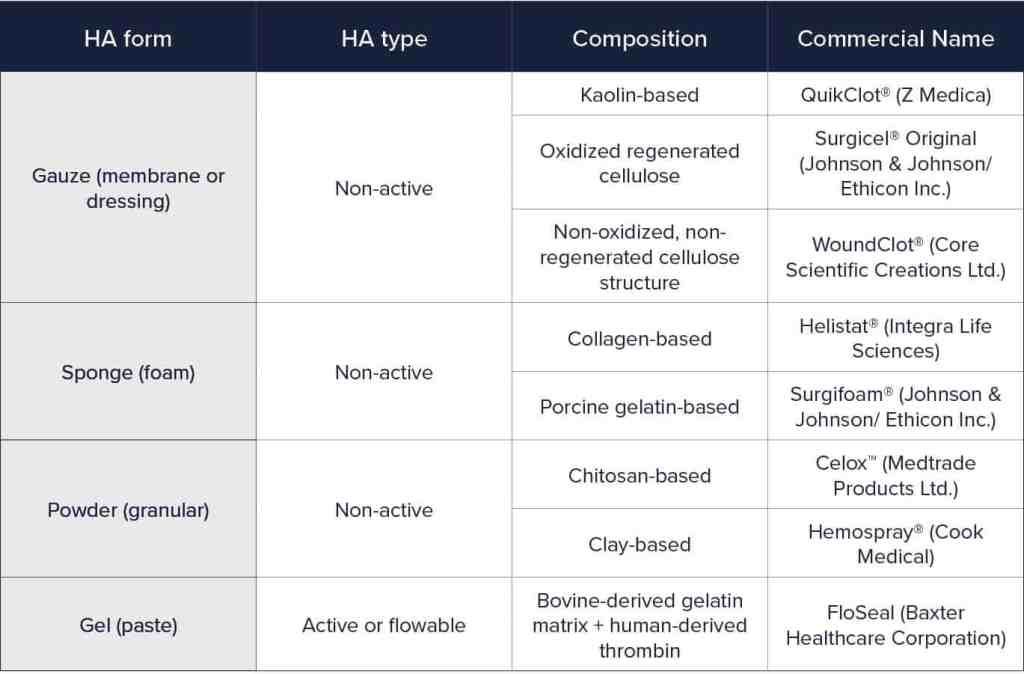 Figure 1A: Schematic of the sample loading and testing in the ElastoSens™ Bio. 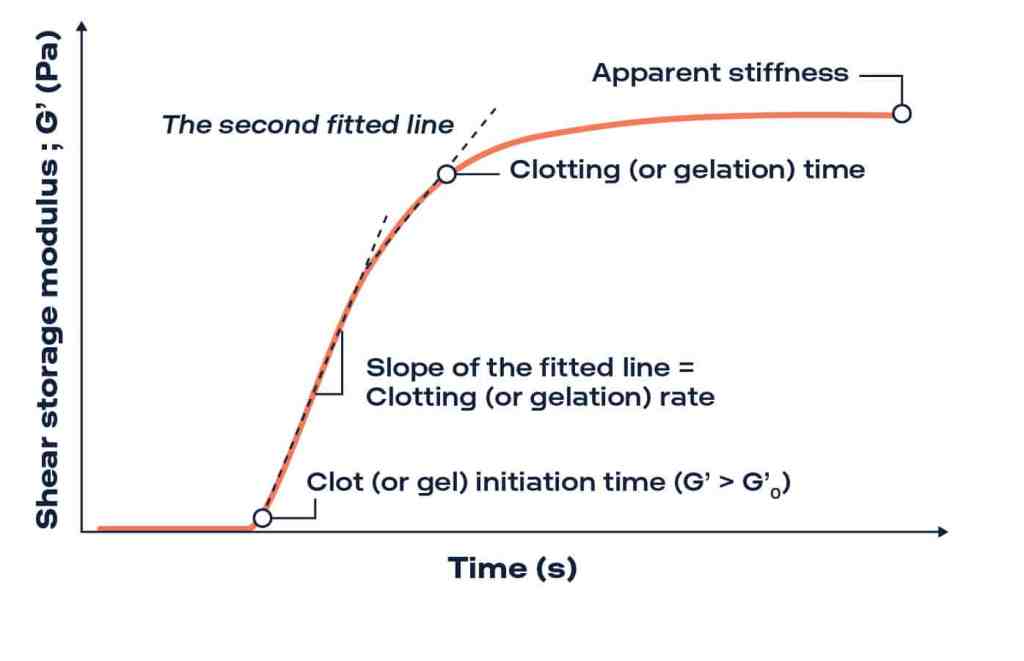 Results in the graphs are expressed as mean ± standard deviation. Statistical significance was obtained using a one-way ANOVA multiple comparison tests in Excel at two significance levels (×p < 0.05 and *p< 0.01).

Different G′ profiles and values for the HA/media systems were obtained. Helistat®, Surgifoam®, QuikClot®, and Hemospray® had an increase in G’ with time just with recalcified blood, whereas Surgicel® and FloSeal had also with citrated blood and WoundClot® and Celox™ with blood and PBS. Pictures of the samples and the overall conclusions of the tests can be found in Figure 2. The differences found among the HAs revealed their distinct behavior to induce and impact coagulation. 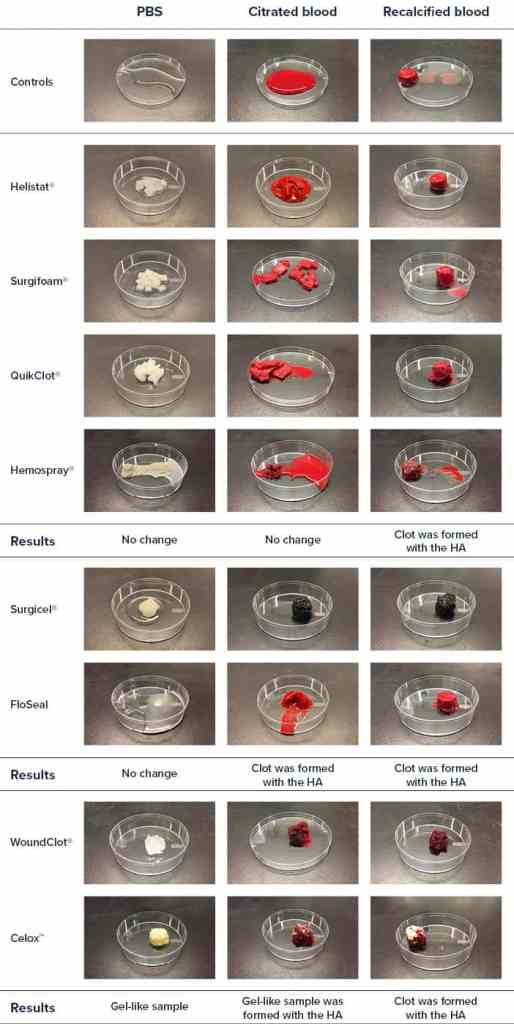 Figure 2: Images of the samples containing each HA and media (PBS, citrated blood, and recalcified blood) at the end of the tests at 37 °C.

Figure 3 shows each descriptor obtained from the curves (G’ versus time) for each HAs and media. As expected for the controls, just recalcified blood presented changes in the G′ profile with time as a result of the coagulation (citrated blood and PBS had a flat curve). CIT indicates how fast clot formation can initiate and therefore, impede bleeding. Figure 3A shows that the CIT of the recalcified blood was significantly (p < 0.05) decreased when mixed with each HA (orange bars), suggesting that the incorporation of the HAs is favorable to stop the bleeding faster. Similarly, the addition of HAs accelerated the development of the clot and so, the CR was higher when compared to pure recalcified blood (Figure 3B). Higher clotting rates indicate that the clot will reach its stability faster which is also favorable for bleeding control. Indeed, the CT which is an estimation of the time required to reach a stable clot  was decreased with the presence of the HA (Figure 3C).

Overall, Helistat®, Surgifoam®, Quikclot®, and Hemospray® showed to be dependent on the natural blood clotting cascade since no clotting or gelation was observed with citrated blood and PBS. Thus, these agents may be less effective in cases of patients with coagulation disorders. On the other hand, Surgicel® and FloSeal led to the formation of a clot sample even in the presence of anticoagulants in the blood (citrated blood). This result suggests that these agents may influence different pathways of the coagulation cascade. From the results with PBS, it was possible to notice that Woundclot® and Celox™ formed a gel once hydrated which may have contributed to the final gel-like sample resembling a clot for the samples with citrated blood. This result reinforced their ability to absorb liquid and form a stable layer against bleeding independently of blood natural coagulation.

In the long term, it has been suggested that clots must be mechanically stable but not too stiff for a proper healing process and dissolution after wound healing. The mechanical stability of each sample incubated at 37 °C was then evaluated for 5 days. The apparent stiffness was nearly stable or slightly increased over time for all HAs (data available in the article), which is positive for the starting of the healing. In the case of biodegradable HAs, a longer study can be done to assess their degradation behavior over time.

In this study, the feasibility of using the ElastoSens™ Bio to characterize blood coagulation under the influence of different types of HAs (both in terms of composition and form) was demonstrated. The real-time changes in G’ as a function of time were analyzed to obtain descriptors of the clotting (or gelation) behavior of each sample which can be correlated with their hemostatic mechanisms. The presence of the HA in the sample significantly accelerated clot formation when compared to pure blood. The results of this study allowed the identification of HAs that are dependent (clot was formed just with recalcified blood) or independent (clot or gel-like sample was formed with recacified blood, citrated blood, and/or PBS) of the natural blood clotting.

Overall, this quantitative characterization can be used to help in the optimization and/or development of novel HAs for many clinical scenarios. In addition, it can be valuable to predict the in vivo performance of HAs and contribute to the selection of the most suitable one for a particular case.

— ElastoSens™ Bio can directly measure the evolution of viscoelasticity during clot formation with a technology that allows robust measurements and easy interaction.

— Blood coagulation under the influence of hemostatic agents can now be quantitatively characterized (in terms of viscoelastic properties) using the ElastoSens™ Bio.

— The viscoelastic properties during clot formation can be used to understand the mechanisms of action and optimize the formulation of hemostatic agents.

— Due to the non-destructive nature of the testing, the mechanical stability of clots can be monitored to assess the longer-term performance of the HAs, in vitro.

— This quantitative in vitro characterization technique has the potential to help predict in vivo and clinical outcomes and to contribute to the selection of an appropriate HA in various clinical scenarios.