We are facing an obstacle in the development of final products in the field of tissue engineering and regenerative medicine. Many different biomaterials were developed in recent years, from animal and plant sources to chemically synthesized in laboratories. This variety is positive since there are multiple needs in the field such as donor organs shortage, inefficient implants or therapies, uncontrolled and non-specific drug delivery, controlling different types of bleeding, among others. Each need requires different biological, chemical and physical properties from the product. In addition, these properties are not static and rather they change with time once the product is implanted because of its direct interaction with living cells. The hurdle is in how scientists can design a product with a specific set of dynamic and oftenly competing properties with the wide range of possible formulations in a high-throughput fashion.

The article selected for this month talks about this subject and proposes artificial intelligence (AI) as a new alternative that can help scientists on this challenge. The group of Dr. Rhett L. Martineau led by Dr. Maneesh K. Gupta from the Air Force Research Laboratory published their work entitled “Engineering Gelation Kinetics in Living Silk Hydrogels by Differential Dynamic Microscopy Microrheology and Machine Learning” in the journal Advanced Biology. In this study, the authors developed a pipeline to automate the characterization and prediction of gel time (the time point in which a liquid precursor solution starts to become a hydrogel) of different living hydrogel formulations to facilitate the discovery of formulations that result in a target range of gel time.

Gelation time is one parameter of interest for material processing such as in the context of 3D printing or simply for its application/deployment in the context of injectable hydrogels. The authors wanted to know which hydrogel formulation produces gelation within 5-15 minutes. The living hydrogels were composed of silk (1.71-6.0% w/w), horseradish peroxidase (HRP – 5-243 U/mL) with hydrogen peroxide (15-300 parts per million) as the crosslinking agent and bacterial cells (E. coli – 0.1 – 1.4 x 109 cells/mL) capable of responding to environmental changes conferring smart and evolvable properties to the biomaterial.

First, the authors automated a method to identify the gelation time using consecutive images obtained through differential dynamic microscopy (DDM). DDM can quantify the mean-squared displacement (MSD) of embedded tracer beads. During the gelation process, probe particles undergo progressively smaller cumulative displacements when approaching the gel point. The authors found that the point at which DDM fails to extract physically reasonable MSD curves was a good estimation of the gel time when compared to other traditional methods. The authors then applied methods of machine learning (ML) based on iterative Bayesian closed-loop design to build a predictive map of the gel time of living hydrogels having the 4 variable components (concentration of silk, HRP, hydrogen peroxide, and bacterial cells).

The image below summarizes the automated gel characterization and prediction pipeline. Each loop began with the preparation of hydrogels whose formulation was selected by a human, or by the results of the previous loop. DDM was then performed and MSD curves were generated to identify the gel time. The ML model was provided with values of gel time and the 4 variable components of the ongoing hydrogel formulation, which was used to estimate the gel time boundaries. In the next step, the model was applied to simulate a new gel time boundaries for different sets of 4 variables. The model finally selected the next formulation (that was expected to most influence the current gel time boundaries) to be experimentally tested in the next loop. 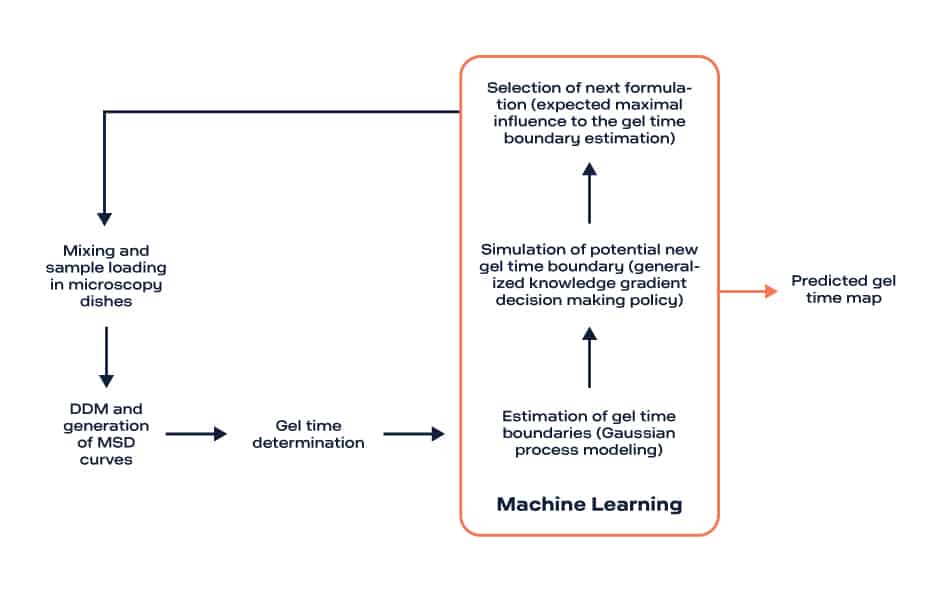 With this developed method, the authors found that with as little as 20 tests of different gel formulations, a good prediction map of gel time was built with only minor alterations in comparison with the 63 tests that were progressively performed. An illustration of this map can be found below in which the regions in dark red correspond to formulations gelling in less than 5 minutes, in dark blue slower than 15 minutes and in light red and blue, formulations gelling within the target window (5-15 minutes). 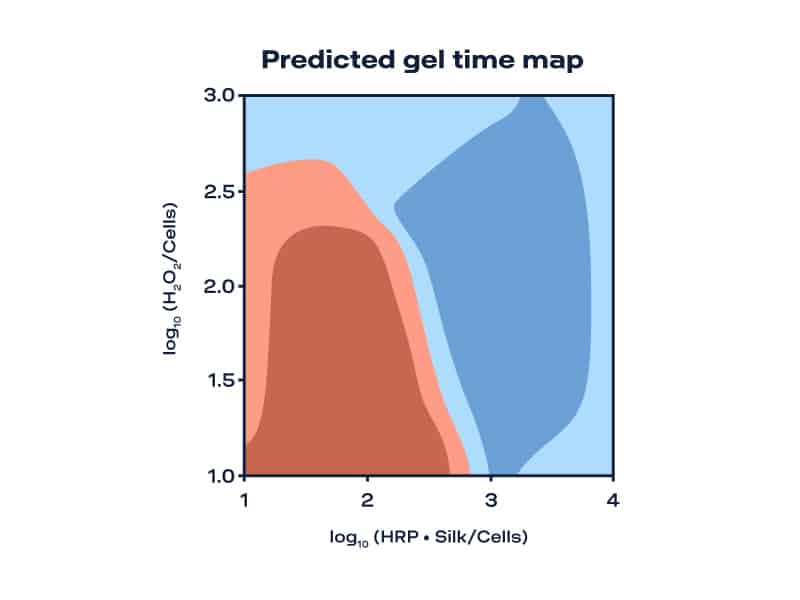 The literature is starting to acknowledge the beneficial application of AI into the development of products in the biomedical field. The great expansion of biomaterials in the last decades is extremely positive for meeting the various needs of the field. However only a fraction of formulations is normally tested for the moment, possibly leaving the most suitable formulation undiscovered. AI can be a great tool to facilitate rapid screening of large numbers of formulations and therefore, to accelerate the discovery of superior products.