The second topic of 2022 of our monthly publications was related to blood coagulation and hemostatic agents (HA). In our application note entitled “Measuring the efficacy of hemostatic agents using ElastoSens™ Bio”, two commercial hemostatic agents (CELOX™ and QUIKCLOT®) were tested with coagulating blood in the ElastoSens™ Bio. The curves of coagulation kinetics give information about the initiation clotting time and speed of clot formation which can be related to the efficacy of the HA. In the second publication, a scientific article reported a great candidate material for composing HA due to its ability to facilitate thrombin generation and consequently fibrin clot formation.

The basic mechanism of action of HA is to provide a barrier over the wound site to prevent excessive blood loss while forcing the agglomeration of cells and proteins in that area. The agglomeration of white and red cells, platelets, and clotting factors shortens clotting time (formation of an insoluble clot) favoring hemostasis and wound healing (illustrated in the image below). 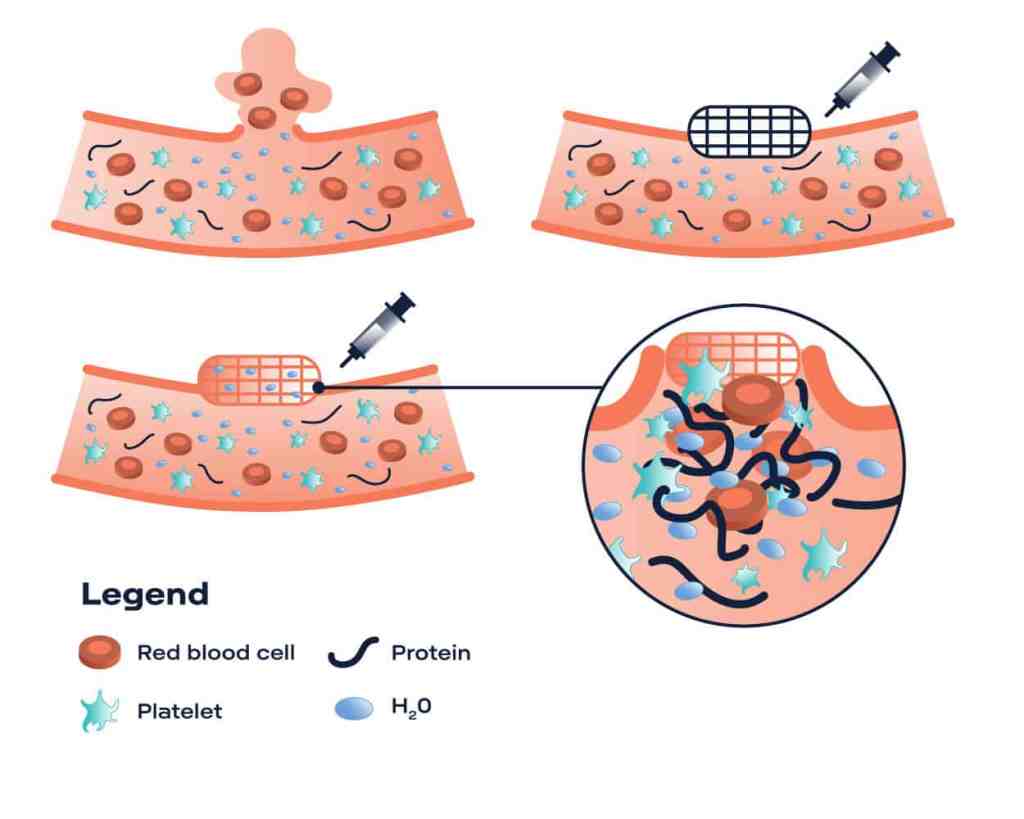 Hemostatic agents can be subcategorized as absorbable agents, biological agents and synthetic agents. Absorbable agents are composed of natural biomaterials such as gelatin, oxidized cellulose, microfibrillar collagen and chitosan and can be found in the form of gauzes, powder, sponge, hydrogel, and films. This type of agent accelerates clotting time and is absorbed by the body within a few weeks. In addition, some of them provide an antimicrobial effect due to their low pH.

Biological agents include thrombin, fibrinogen and platelet agents. Thrombin are enzymes that play an essential role in the clotting cascade. It promotes the conversion of the protein fibrinogen (that circulates in the blood) into fibrin which helps to form an insoluble clot. This enzyme is purified from animal and human sources and can be injected pure at the wound site or mixed with fibrinogen and/or platelets with or without an absorbable agent. Fibrinogen and platelets are mostly human-derived.

Synthetic agents are polymers such as polyethylene glycol and cyanoacrylates that form stronger matrices used as sealants. They are normally liquid solutions that are injected at the wound site and rapidly form a polymer matrix that glues two surfaces together. They can be used as replacements for sutures or for filling holes of sutures and staples.

In the case of absorbable and synthetic agents, some side effects can include high swelling that may compress surrounding tissues, inflammation and immune reactions. In addition to these possible effects, the selection of the best HA depends on the type of bleeding, their interaction with the surrounding tissues, and the patient coagulation profile.

The number of HA has drastically increased in the last two decades and so the need for dedicated instrumentation to characterize the complex interaction of HA with blood. As shown in our application note, the ElastoSens™ Bio can provide valuable information about the overall blood absorption into the HA and the coagulation kinetics allowing the assessment of the HA efficacy. Dedicated instrumentation empower researchers to further improve HA for attending the large varied demand of this field such as in surgeries and non-surgical procedures, hemorragies, and trauma.

Towards a standard method for mechanically characterizing soft organs

Directing efforts with artificial intelligence in the biomedical field