This study was a joint collaboration between Rheolution (QC, Canada) and Gelomics (QLD, Australia).

All cells in the human body are exposed to mechanical forces which regulate cell function and tissue development, and each cell type is specifically adapted to the mechanical properties of the tissue it resides in. The matrix properties of human tissues can also change with disease and in turn facilitate its progression. For example, normal mammary epithelial cell growth, survival, differentiation and morphogenesis are well-supported by interaction with a soft matrix similar to normal breast tissue stiffness. Following transformation during breast cancer, however, the tissue becomes progressively stiffer [1] and tumor cells become significantly more contractile and hyper-responsive to matrix mechanical cues, ultimately driving epithelial to mesenchymal transition (EMT) and metastasis [2,3]. The mechanistic investigation of the complex interplay between substrate properties and cellular behavior requires advanced cell culture methodologies that overcome the limitations associated with traditional culture approaches [4].

Gelomics LunaGel™ Extracellular Matrices (ECMs) are photocrosslinkable hydrogels that provide a controlled 3D cell culture system to study pathological and physiological process in vitro. Based on ECM components as collagen type I, III, IV, and V, as well as connective tissue glycoproteins and proteoglycans, these ECMs closely mimic the natural extracellular matrix (ECM) surrounding cells in the human body and facilitate cell attachment, proliferation, differentiation, migration, and proteolytic ECM degradation. In addition, the photocrosslinking process allows scientists to have more control over their final stiffness. By simply varying the duration of crosslinking, the gel stiffness can be fine-tuned to mimic soft and hard tissues such as the brain, liver, breast, cartilage, among others, in both healthy and diseased conditions. For these reasons, they are ideal substrates for the culture and differentiation of a wide range of cell types and facilitate the examination of matrix stiffness induced changes to cellular behavior.

ElastoSens™ Bio measures with no contact the viscoelastic properties of soft materials. By applying gentle vibrations to the sample, the instrument is able to record the photocrosslinking kinetics at the desired wavelength. In this application note, LunaGel™ ECMs based on chemically modified porcine skin and bovine bone gelatin were both photocrosslinked while their crosslinking kinetics were assessed in real time in the ElastoSens™ Bio. To investigate the suitability of LunaGel™ ECMs to mimic pathophysiological changes in tissue stiffness and its effects on cancer progression, breast cancer spheroids were cultured on substrates of varying stiffness and their morphologies were observed.

LunaGel™ ECMs based on chemically modified porcine skin gelatin, type A (LunaGel™ – Porcine Skin Gelatin – low and high stiffness, Gelomics) and bovine bone gelatin, type B (LunaGel™ – Bovine Bone Gelatin – low and high stiffness, Gelomics) were prepared according to the manufacturer’s instructions. Briefly, photoinitiator vials were dissolved in PBS and mixed with the photocrosslinkable ECM solutions at 37 °C. 2 mL of the products was pipetted in the sample holder of the ElastoSens™ Bio and the viscoelasticity test was immediately started at 37 °C using the following measurement sequences:

Shear elastic modulus (G’) and tan(δ) were obtained directly from the ElastoSens™ Bio. Initial crosslinking time was determined from the crossover of G’ and G’’ (tan(δ) = 1).

Fig. 1 shows the evolution of the shear storage modulus (G’) as a function of crosslinking time for low and high stiffness porcine (left) and bovine (right) photocrosslinkable LunaGel™ ECMs. Measurements were taken without light exposure during the first 2 min of the test. The light was then programmed to be switched on by the ElastoSens™ Bio instrument at 2 min and its effect was clearly observed with the increase in G’ after this time point up to 12 min (when the light was switched off). Measurements were continued for around 15 minutes to identify the final viscoelastic properties of the gel. Samples were homogeneously crosslinked after the test (Fig. 2).

Fig. 2: Representative example of a LunaGel™ sample after the test.

For both low and high stiffness formulations, the duration of light exposure can be varied to reach desired target stiffnesses that are lower or equal to the final G’. Fig. 4 shows the evolution of the shear storage modulus (G’, Pa) as a function of time for the high stiffness porcine LunaGel™ crosslinked with 9.0 mW/cm² for 2, 4, 8 and 10 minutes, respectively. Similarly, the light was programmed to be switched on after 2 minutes of testing with the mentioned duration. As expected, the curves were nearly the same during the first 4 minutes. After this time point, the G’ continued to substantially increase over time for the samples under longer light exposure. 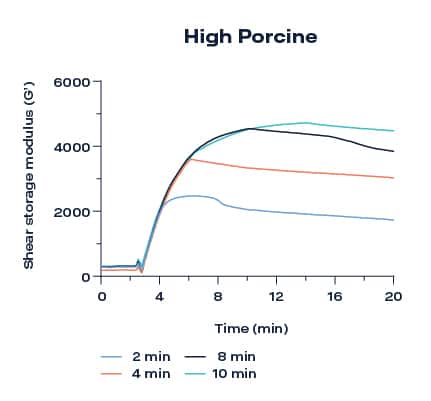 The viscoelastic evolution of LunaGel™ ECM products from Gelomics during photocrosslinking were successfully captured in real time using ElastoSens™ Bio. Final G’ was approximately 8 times higher for the high stiffness compared to the low stiffness formulations. The final viscoelastic properties of these hydrogels were easily tuned by varying the light exposure time during crosslinking (405 nm). The invasiveness of breast cancer cells significantly increased with ECM stiffness, demonstrating the ability of the LunaGel™ system to closely mimic physiological and pathophysiological tissue conditions.