This study was performed as a joint collaboration between Rheolution (QC, Canada) and Advanced BioMatrix (CA, USA).

Gelatin and hyaluronic acid (HA) are biomaterials widely used in the biomedical research field. HA is the most abundant glycosaminoglycan in the body and is an important component of several tissues. HA contributes to tissue hydrodynamics, movement and proliferation of cells, and participates in a number of cell surface receptor interactions. Gelatin is a hydrolyzed form of collagen, which is the most abundant protein in the human body, and contains many of the same amino acids and cell binding sites. In an effort to provide an in vivo-like environment for cells, researchers often grow them in gelatin and HA hydrogels.

Gelatin and HA have been chemically modified (methacrylated) with photosensitive groups to allow a better control over the viscoelastic properties of the final hydrogels through photocrosslinking. For this reaction (photocrosslinking) to take place, the modified gelatin and HA should be mixed with a photoinitiator such as lithium phenyl-2,4,6-trimethylbenzoylphosphinate (LAP) that absorbs blue light creating free radicals. These radicals react with the acrylate groups to induce crosslinking. This technology allows the researcher to mimic the mechanical properties of various tissues in the human body, while still providing native cell binding sites [1,2].

The use of photocrosslinkable hydrogels offers many different strategies to control their final viscoelastic properties. The concentration of the biomaterial and photoinitiator, their degree of modification, the light intensity and exposure time can all be varied to fine tune the outcomes. With these many variables, it can be challenging to analyze the possible combinations in an effective way. In this work, two concentrations of PhotoHA® and PhotoGel® provided by Advanced BioMatrix (CA, USA) were tested in the ElastoSens™ Bio (Rheolution Inc, QC, Canada) under light exposure (405 nm) to obtain their crosslinking kinetics in real time. In addition, different exposure times were applied to the higher concentration of the PhotoGel® product. The effect of the biomaterial concentration and the exposure time on the viscoelastic properties of the hydrogels was then evaluated.

Methacrylated Hyaluronic Acid (PhotoHA®, 5274, Advanced BioMatrix) and Methacrylated Gelatin (PhotoGel®, 5272, Advanced BioMatrix) were prepared according to the manufacturer’s instructions. Briefly, LAP was dissolved in PBS (17 mg/mL). PBS was added into the PhotoHA® and PhotoGel® vials and kept at 4 °C and 60 °C, respectively, until complete dissolution. PhotoHA® was prepared at 1 % and 2 % and PhotoGel® at 5 % and 10 % (w/v %). 3 mL of PhotoHA® or 2 mL of PhotoGel® was pipetted in the sample holder ElastoSens™ Bio and the test was immediately started.

Fig. 1 shows the evolution of the shear storage modulus (G’, Pa) as a function of time for the two concentrations of PhotoHA® (left) and PhotoGel® (right). Measurements were taken without light during the first 10 min of the test to identify the initial viscoelastic properties of the gels. The light was then programmed to be switched on by the instrument at 10 min and its effect was clearly observed with the increase in G’ over time. During light exposure, the LAP photoinitiator absorbs energy from the 405 nm blue light creating free radicals. These radicals continuously react with the acrylate groups inducing crosslinks between them which is responsible for the reinforcement of the hydrogels and the gradual increase in G’. All the hydrogels were homogeneously crosslinked after the tests (Fig. 2). 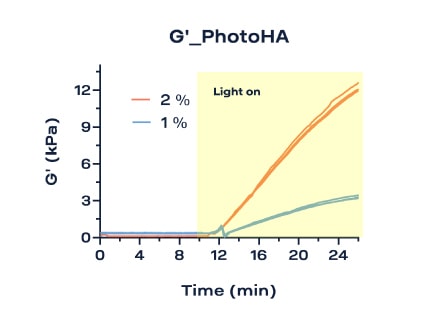 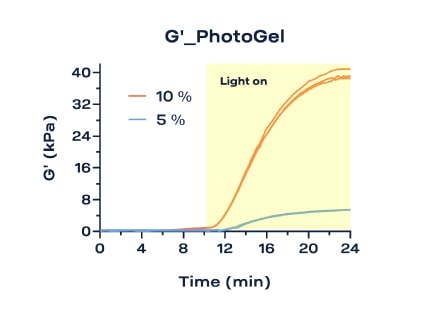 Fig. 1: Shear storage modulus (G’, Pa) as a function of time for the two concentrations of PhotoHA® (left) and PhotoGel® (right) products. 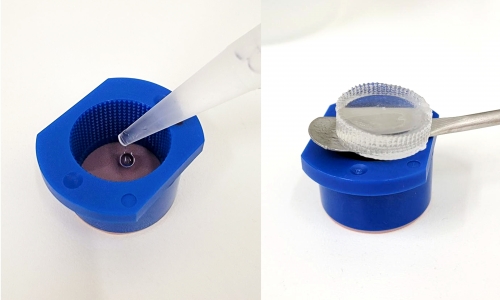 Fig. 2: PhotoGel® before (left) and after (right) photocrosslinking in the ElastoSens™ Bio.

In addition to the concentration, other parameters such as intensity and duration of light exposure can also affect the crosslinking density of the hydrogels and therefore, its viscoelastic properties. Fig. 3 shows the evolution of the shear storage modulus (G’, Pa) as a function of time for the 10 % PhotoGel® under light exposure for 2, 4 and 6 minutes. Similarly, the light was programmed to be switched on at 10 minutes of testing with the mentioned duration. 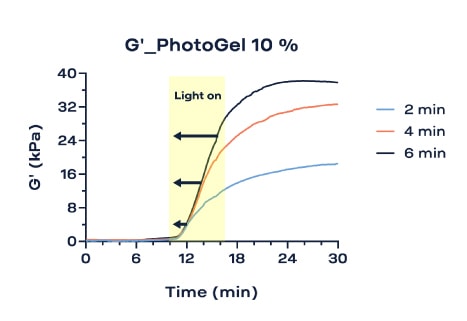 As expected, the curves were nearly the same during the first 12 minutes of testing for the PhotoGel® 10 %. After this time point, the G’ continued to substantially increase over time for the samples under longer light exposure. Interestingly, the increase in G’ continued even after the light was switched off but at a lower rate. This means that the crosslinking reactions were still occurring for some minutes more (10-20 min). Therefore, the continuation of the reaction and the consequent increase in the hydrogel strength over time should be considered when applying photocrosslinking to mimic certain tissue strengths.

Fig. 4 shows the evolution of the shear storage modulus (G’, Pa) as a function of time for the 1 % PhotoHA® under light intensities of 4, 8 and 15 mW/cm2 switched on at 10 min. The higher light intensity accelerated the crosslinking process (lower initiation time and higher slope of the curves) and led to stiffer hydrogels. This result is in accordance with the theory, since the rate of polymerization (crosslinks) is directly (but not linear) proportional to the intensity of the incident light [3]. 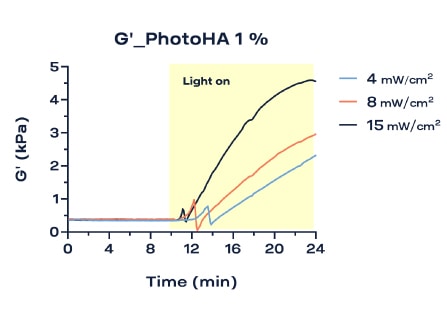 PhotoHA® and PhotoGel® products from Advanced BioMatrix were successfully photocrosslinked in the ElastoSens™ Bio and the evolution of their stiffness was captured in real time. The hydrogel concentration resulted in a pronounced effect on its viscoelastic properties. The results showed the great sensitivity (among the products and concentrations) and repeatability (triplicates) of the measurements. Higher light exposure and intensity led to stiffer hydrogels. The G’ continued to increase even after light exposure. These two parameters (light duration and intensity) can be used to tune the viscoelastic properties of the crosslinked hydrogels.

[2] Shrestha, A., Allen, B. N., Wiley, L. A., Tucker, B. A., & Worthington, K. S. (2020). Development of high-resolution three-dimensional-printed extracellular matrix scaffolds and their compatibility with pluripotent stem cells and early retinal cells. Journal of Ocular Pharmacology and Therapeutics, 36(1), 42-55.