Article of the Month | September 2021

You might have seen dentists applying a light over a tooth that they’ve just treated. During this procedure, the patient was probably using a goggle glass to protect the eye against the high light irradiance from the instrument. This light is responsible for transforming the deformable resin used to fill cavities and repair broken teeth into a rigid resin that is similar to the teeth itself. This happens because the small molecules that form the resin gain energy during light exposure and gradually bind to themselves forming larger chains of molecules. This procedure can also be found in other applications such as surface coatings using paints and varnishes, and 3D printing manufacturing processes.

The use of light to induce changes in the properties of a material (photostimulation) has also been widely explored using hydrogels for biomedical applications. Specifically, hydrogels that are based on natural components have been chemically modified to allow a precise control over their mechanical properties after light exposure. In other words, these hydrogels are able to transform from a liquid state to a gel state (jello-like) with different levels of firmness (softer and harder gels) according to their formulation, light intensity and exposure time. In our last publications, we have seen that the viscoelasticity of hydrogels should match the viscoelasticity of the organ that they are intended to treat and also that the viscoelasticity of the cell’s environment affects their proliferation, metabolism, and function. Therefore, photosensitive gels are great candidates of biomaterials for tissue engineering and regenerative medicine. 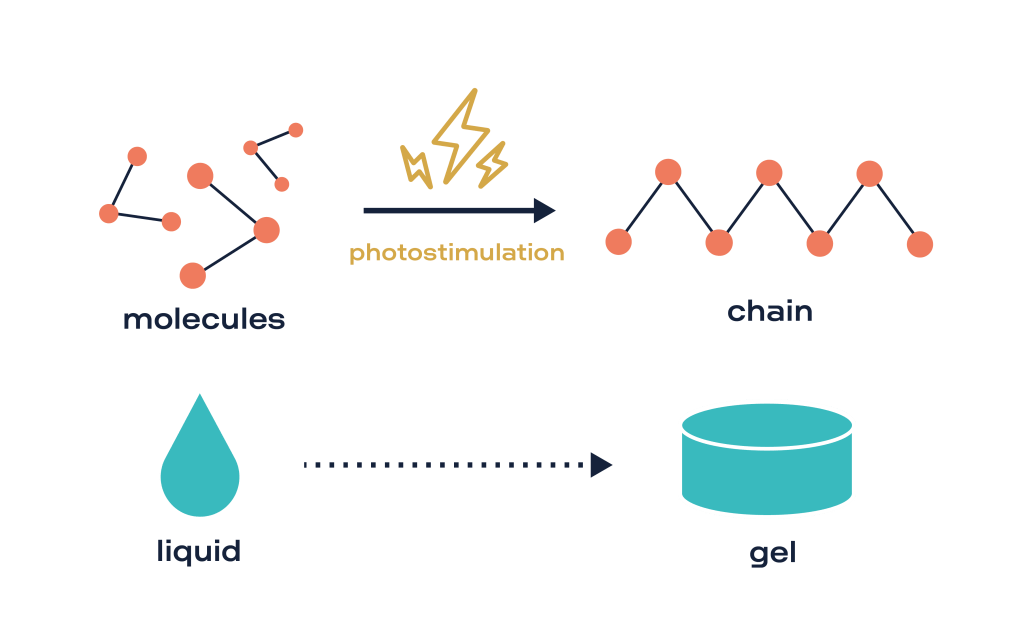 A number of hydrogels are photocrosslinked (the process in which small molecules gradually bind to themselves during the light exposure resulting in firmer gels) with UV light. Similar to the complications of sun UV irradiation, the use of UV light in the biomedical field raises safety concerns such as DNA damage, accelerated aging of tissues, and cancer. Therefore, researchers are adapting previous technologies or developing novel hydrogels that can be crosslinked with visible light to reduce health-related problems.

A group of researchers from Harvard University, Massachusetts Institute of Technology, and Northeastern University led by professors Ali Khademhosseinia and Nasim Annabi developed in 2018 an injectable hydrogel based on gelatin that can be photocrosslinked with visible light and used for myocardial (heart muscle) regeneration. The article entitled “In Vitro and In Vivo Analysis of Visible Light Crosslinkable Gelatin Methacryloyl (GelMA) Hydrogels” published in the Biomaterials Science Journal reported that by changing the formulation of the developed hydrogel (concentration of its components), the mechanical properties can be tuned according to its final application.

The group prepared hydrogels with 10 % (w/v) modified gelatin and different concentrations of crosslinking components named triethanolamine (TEA at 0.5, 1.0, and 1.5 %) and N-vinylcaprolactam (VC at 0.5, 1.0, and 1.5 %). These different formulations resulted in a large span of mechanical properties, represented by their compressive modulus ranging from 5.0 to 56.0 kPa and their tensile modulus ranging from 5.0 to 22.7 kPa. The level of mechanical strength reached by these hydrogels was comparable to that of native heart tissue. Therefore, the authors concluded that they should integrate well with the cardiac tissue without raising major and common concerns related to mechanical mismatch.

In addition to the hydrogel formulation, the light exposure time is also a parameter that can affect the final mechanical properties of the hydrogel. Longer light exposure provides more energy to the molecules and therefore, more crosslinks can take place. The authors maintained this parameter equal to 180 seconds for the samples prepared for physical and mechanical characterization. However, for the next steps of the study (in vitro tests), the exposition time was adjusted to 20 seconds because the sample thickness was reduced from 1 mm to 150 µm. Apart from the thickness, sample geometry was also changed in this work (cylinder, rectangular and later amorphous when injected in vivo). The influence of the sample geometry and dimensions on the crosslinking during light exposure would be a valuable point to investigate to confirm if the mechanical properties of these different hydrogels are similar.

The optimized hydrogel formulation was selected for the future studies (10 % gelatin, 1.5 % TEA, 1 % VC and 0.1 mM eosin Y). With the encouraging similarity of this formulation compared to heart tissue, the group investigated how cells from the heart (cardiomyocyte) interact with it. The results showed that the hydrogel supported the growth of heart cells and preserved their ability to contract. The beating frequency of the cells grown on the hydrogel was measured during 10 days and was shown to vary from 18 – 77 beats per minute.

The last and exciting step of this study was the in vivo tests. The hydrogel was injected in the heart of a rat that had suffered a myocardial infarction. The hydrogel was then photocrosslinked with visible light. Preliminary results showed that the hydrogel was efficiently delivered and crosslinked into the infarcted regions. After 3 weeks, the presence of the hydrogel appeared to enhance cell viability and maintained large blood vessels in the area.

The use of light to induce crosslinks in hydrogels allow the better spatiotemporal control of their mechanical properties facilitating the development of personalized biomaterials and bioengineered tissues. As shown in this reported study, injectable biomaterials can be directly molded into the geometry of the implementation site after light exposure. Photostimulation is also widely applied in 3D printing technologies for producing constructs with specific and delicate properties. Altogether, photostimulation has been contributing to the improvement of the tissue engineering and regenerative medicine field making their products closer to the healthcare system.

When mechanical testing slows down the development of bioengineered vascular grafts

Teens’ Tendency To Take Risks Exposed By Their Brain’s Viscoelasticity