Cheese is obtained from coagulating milk by separating the milk gel into solid curds and liquid whey. The milk gel is cut into small cubes to increase curds surface/volume ratio and allow whey expelling from curds, a phenomenon called syneresis. The objective of any cheesemaker is to optimize the retention of fat and proteins in cheese while the level of moisture is maintained at a controlled level.

The firmness of milk gel when being cut greatly affects Solids Retention Rate, which is the proportion of solids in milk (everything but water) that is recovered in cheese curds. The Solids Retention Rate specifically measures the performance of milk treatment, recipe formulation, coagulation kinetics as well as the relevance of the selected gel firmness at the cutting step. Contrary to the overall cheese yield that is affected by many factors of the process, Solids Retention Rate measures the efficiency of production at the cheese technology level. The Solids Retention Rate may also be called “vat yield” or “coagulation yield”. It represents the efficiency of an industrial process to convert milk into cheese curds and is easily calculated from Milk Solids and Whey solids. Solids that don’t turn into cheese end-up as whey solids losses.

Even though they may be recovered by various processes and turned into whey ingredients, it is in most cases more profitable to retain solids into cheese. For a given milk composition there is an optimal cutting firmness to reach the highest vat yield. Cutting the gel too soft leads to lower vat yield through increased whey fat loss, whereas cutting too firm results in too high curds moisture content and difficult crumbly curds cutting. Suboptimal cutting firmness also alters the ripening process and final product quality.

It is generally known that better profit is made by turning milk solids into cheese compared to reprocessing whey solids to extract fat and proteins. Because whey ingredients have lower value and require extra energy, equipment and staff to be extracted, it is interesting to increase vat yield in order to make more cheese from the same milk volume. In addition, since milk production is responsible for over 90% of cheese making carbon footprint, maximizing vat productivity directly contributes to reducing the environmental impact of the cheese industry.

Presently, in cheese plants, milk gels are cut either: at a fixed time, at a calculated time from measured flocculation time and/or according to cheesemakers’ subjective evaluation of gel texture and appearance. None of these techniques is perfectly accurate nor sensitive enough toward variations of the milk gel firmness. These techniques lead to considerable fluctuations in Solids Retention Rate and combine with many other factors that affect the yield such as seasonal milk variation and complex milk standardizations and treatment.

There is a clear need for objective, quantitative, at-line and real-time measurements of milk gel firmness during coagulation that allow automatic and consistent gel cutting.

This is why Rheolution Inc. developed CoaguSens™ Connect, the first industrial testing instrument that:

—     Quantitatively measures milk gel firmness during coagulation.
—     Monitors close to the coagulation vat the formation of the curd.
—     Automatically triggers cutting when the optimal target firmness is reached by the curd.

CoaguSens™ Connect characterizes in real time the evolution of milk gel firmness during coagulation under the action of enzymes (coagulation) or ferments (fermentation). The patented technological principle behind this instrument is purely mechanical: the dynamic response of the milk sample to small and gentle vibrations is first measured using a contact free laser probe and then processed to obtain a quantitative value for gel firmness (elasticity or shear storage modulus G’). CoaguSens™ Connect has the following main specifications:

CoaguSens™ Connect comes with a modular, user-friendly and connected touchscreen-based user interface, called CoaguTouch™, designed to configure the instrument, set and run a test and analyze data. It has been designed for a simple integration with existing PLC-based control systems for automatic process control. CoaguTouch™ provides user-oriented tools and functions to manage, analyze, display, store and transfer data.

The objectives of the study were:

1. To use CoaguSens™ Connect to measure and plot milk gel firmness in real-time during coagulation and close to the vats.

Solids Retention Rate is a better performance indicator of coagulation than overall cheese yield that is influenced by cheese moisture and all production processes that follow milk coagulation. The in-plant study took place in a North-American cheddar cheese plant that uses a highly enriched milk:

The study was structured in 3 phases:

During this phase, milk gel firmness at the cutting step was measured using CoaguSens™ Connect on 40 different vats. The cutting time was decided by the cheesemaker following a manual palpation technique to assess the texture of the curd. 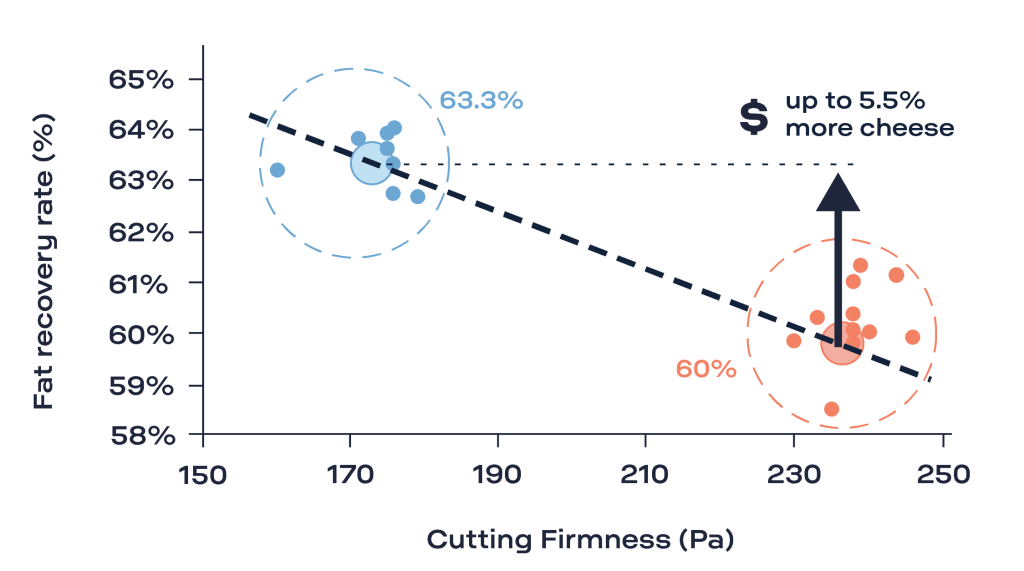 By displaying live coagulation kinetics, CoaguSens™ Connect allows quick and early reaction to coagulation defects, human error or equipment failure (culture and rennet lower dosage or poor activity, milk defects, forgotten step or ingredient, equipment breakdown, etc.). Whatever happens, CoaguSens™ Connect tells you anytime what firmness the milk gel is at, so you can make the right decision and save your batch, yield and cheese quality. Return on investment (ROI) in a plant depends on production volumes and varies from 6 to 12 months.

The cheese industry needs a technology capable of mimicking milk gel manual palpation, while being more accurate and reliable. Hotwire and light-scattering technologies offered unsatisfactory results because they do note measure milk gel firmness. Since they are installed inside the vats, they are extremely vulnerable to local heterogeneities in terms of coagulant distribution in the vat.

CoaguSens™ Connect, delivers real time measurement of milk gel absolute firmness that compares to human feel. Gel firmness is measured with a high sensitivity and plotted before cheese makers’ eyes from renneting to cut and after. These unique features allow to perfectly control coagulation and to quickly react to any drift. It also empowers cheesemakers, R&D and productivity improvement specialists to get the highest vat yield for each of their cheese recipes.

Even for highly standardized milk operations, coagulation kinetics do subtly vary. If curds are cut by the clock, suboptimal firmness at cut will repeatedly occur along with suboptimal yield. In-plant tests described in this study revealed that CoaguSens™ Connect can help increase vat yield. Within weeks, Solids Retention Rate was raised from 60.0% to 63.3% and vat productivity by 5.5%.